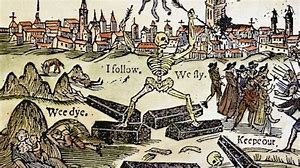 In April 2020 New York is the foremost city in the US battling to overcome the present Covid 19 pandemic with at least 6,000 deaths and rising. Can we see the similarities with New York if we look at the London accounts of their plague in 1665? Here are some interesting observations and contemporary quotes from Daniel Defoe's 1772 book "A Journal of the Plague Year". (His observations were given to him by his uncle as he was only five when the plague struck.)

The Bubonic Plague that hit London started in December 1664, but really took off in the warm spring and summer months of 1665 and lasted into 1666. Some 100,000 Londoners died in the plague year, about one-quarter of the city’s population.

After the initial discovery of two men, believed to be French, were inspected by two physicians and a surgeon, their bodies showed "tokens of the sickness". Thus started the plague.

" the richer sort of People, especially the Nobility and Gentry, from the West-part of the City throng’d out of town, with their Families and Servants in an unusual Manner; …Indeed nothing was to be seen but Waggons and Carts, with Goods, Women, Servants, Children, &c. Coaches fill’d with People of the better Sort, and Horsemen attending them, and all hurrying away." (p. 9)

Those who stayed behind:

"So, they were as mad, upon their running after Quacks, and Mountebanks, and every practising old Woman, for Medicines and Remedies: storeing themselves with such Multitudes of Pills, Potions, and Preservatives, as they were call’d; that they not only spent their Money, but even poison’d themselves before-hand, for fear of the Poison of the Infection, and prepar’d their Bodies for the Plague, instead of preserving them against it." (pp. 30-31)

The narrator praises the real physicians for their skill and selflessness:

"They ventured their Lives so far as even to lose them in the Service of Mankind; They endeavoured to do good, and to save the Lives of others; But we were not to expect, that the Physicians could stop God’s Judgments, or prevent a Distemper eminently armed from Heaven, from executing the Errand it was sent about. Doubtless, the Physicians assisted many by their Skill, and by their Prudence and Applications, to the saving of their Lives, and restoring their Health: But it is no lessening their Character, or their Skill, to say, they could not cure those that had the Tokens upon them, or those who were mortally infected before the Physicians were sent for, as was frequently the Case." (pp. 36-37)

The city officials made rules about social or physical distancing, and self-isolation. They also made orders to shut things down and prevent groups of people from gathering:

"THAT all Plays, Bear-Baitings, Games, singing of Ballads, Buckler-play, or such like Causes of Assemblies of People be utterly prohibited, and the Parties offending severely punished by every Alderman in his Ward. (p. 45) ’THAT all publick Feasting, and particularly by the Companies of this City, and Dinners at Taverns, Alehouses, and other Places of common Entertainment be forborn till further Order and Allowance"… (p. 46)

One of his observations is that “the Infection was propagated insensibly, and by such Persons as were not visibly infected, who neither knew who they infected, or who they were infected by.” (p. 152) He continues later to say:

"Here also I ought to leave a farther Remark for the use of Posterity, concerning the Manner of Peoples infecting one another; namely, that it was not the sick People only, from whom the Plague was immediately receiv’d by others that were sound, but THE WELL. To explain my self; by the sick People I mean those who were known to be sick, had taken their Beds, had been under Cure, or had Swellings and Tumours upon them, and the like; these every Body could beware of, they were either in their Beds, or in such Condition as cou’d not be conceal’d. By the Well, I mean such as had received the Contagion, and had it really upon them, and in their Blood, yet did not shew the Consequences of it in their Countenances, nay even were not sensible of it themselves, as many were not for several Days." (pp. 183-84)

Defoe's advice? He ends with this "prescription" :

" Upon the foot of all these Observations, I must say, that tho’ Providence seem’d to direct my Conduct to be otherwise; yet it is my opinion, and I must leave it as a Prescription, (viz.) that the best Physick against the Plague is to run away from it." (p. 190) 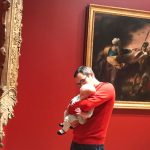 Take Me Out To The Ballgame! | A Guide to Kid-Friendly Ballp 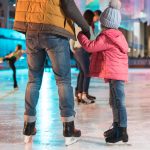